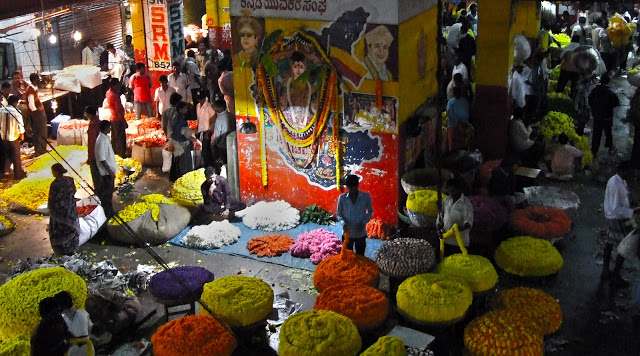 Inside KR Market in Bangalore

It has been hard for me to fall asleep today. And I had to wake up very early because I had planned to go to KR Market as suggested by Kshitiz, to experience what people over there do as Non Intentional Design. At 3:30AM I gave up, and decided to shortcut my alarm clock. I rode my bike for about 45 minutes, almost alone in the streets. I noticed quite a few people already working, preparing food or cleaning. A city like Bangalore never sleeps, that is for sure. Lucky me, I didn’t get lost, although I thought I was. I went down a narrow street little by little and suddenly there were more and more people. Hey, I arrived! I was hoping to arrive before the beginning of the sales, to take some photographs of the empty place, why not sit down somewhere, listen to music and just look at people living their lives. For what I have seen, it probably begins around 4:00AM, which means that people come at 3:30, which means they have a crazy life cycle to wake up everyday at this hour.

I have been truly surprised at first sight, to discover how wonderful flowers cohabit in such a dirty place. Outside the market there is absolutely no clean space. Every square meter is covered by a thin layer of an undefined mixture. Unsold things are left on the side, and there are women who regularly sweep flowers on the ground. The inside market is much cleaner than the outside, which makes me think it is for wealthy merchants or something like that.

Another surprising thing. I had the impression that there were so many sellers, but only a few buyers. In fact, sellers are everywhere. Inside the market itself, within conventional stores; but also outside the market and in the streets around. Outside they often display their merchandise on the ground, using a mere and almost clean piece of fabric to protect the flowers. Last kind of sellers, the moving ones. They only have a few flowers in their hands and try to catch clients directly on their way. Among that huge amount of people, I wonder how many buyers there were. My opinion about this is that I came too early to see “normal” people coming to buy flowers.This time was ment to be for professionals.

I will try to come back again later, at another time. Maybe earlier, to see the really beginning. And also experience other things, like interacting with sellers and buyers.
Text and Photo: Jean-Baptiste Haag,  A4 student and intern