Life as an Enthusiastic Intern

Aura Herbalwear is a company based in Ahmedabad, that makes naturally- and organically-dyed garments. They are in need of a designer for T-shirt designs/ prints and someone who can also organise awareness and advertisement campaigns for them.

My first morning at work began with a ride to work with my very bosses in their own car.
Isn’t that an awful way to treat an intern? 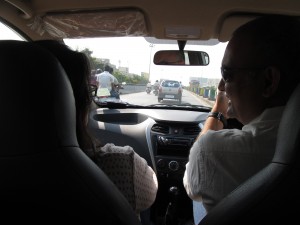 In the car we discussed most of the work I could do.
We brainstormed a number of ideas:

1. Aura needs a short film or advert, something that can be circulated and something that will explain the natural dying processes that take place within factory walls. This can also serve as a pitch to younger audiences.
Now, I’m not quite the film maker or camera woman, and I believe that nothing short of an extremely well-directed short film can communicate the message of Aura. So I proposed to make a series of short animations overlaid on some footage to explain different aspects of Aura that also « young »ly communicate the message.

2. Aura needs some form of viral/ tactile advertisement. One of the ideas Sonal and Arun had was to keep a camel-drawn lorry (they are not an uncommon sight on Ahmedabad roads) that dyes bits of cloth and passes them about to the public at the small signals. 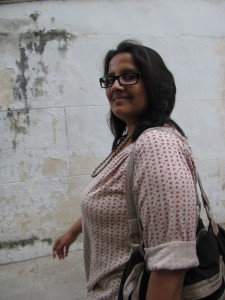 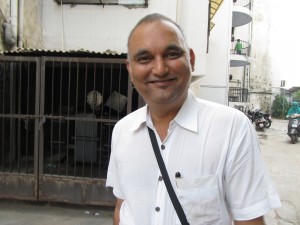 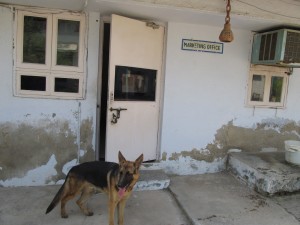 Other Members of the Factory 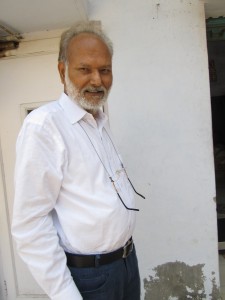 The Aura Showroom + progress with my projects

Aura, as of last week, features VERY EXCITINGLY on google maps like this.

The shot is form the showroom, located in Vastrapur, Ahmedabad. 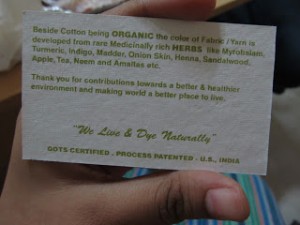 This is their card on recycled paper. 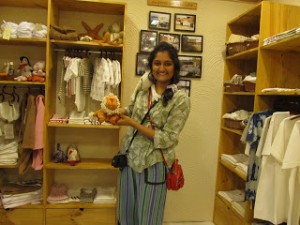 That’s me inside the shop 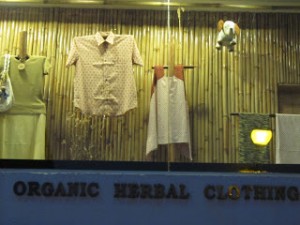 Reflections on my week at Aura:

As time goes by and my little tasks at the office increase (editing the text on the brochure, working on the mood board, sketching a 3d perspective view of the upcoming office), my designated tasks at Aura Herbal Wear become clearer to me.

I’m asked to think of innovate ways to market the produce of Aura – a company that has been running for 10 years and still is not receiving the relevant love and credit from audiences it deserves.

One of my most major tasks would be to design Aura a set of animated movies that could double up as ads and serve as a means of viral advertisement.

How to make young people engage with Aura?

How to make the transparency of Aura processes (cradle to cradle, 100% sustainable peripheral processes, such as the recycling of water), the absolute uniqueness of the product it offers, something indispensable to more people, and more clients?

How to make Aura something of a cult following?

When I was thinking of these questions, one of the greatest and surprising examples that came to my mind was the Kony 2012 campaign. (Here is the viral video). It was, of course, in my opinion, a complete fraud, but its marketing tactic was unbelievably bang-on. What, then, if deconstructed, would we possibly figure out some especially useful tactics that could also be used in order to promote something good?

While explaining the Kony 2012 disaster (ie how the campaign actually increased the number of children Kony’s army captured by nearly ten times as much) to my employers, Arun said something strange. He said « Oh so they sold a kit? I have a kit too! » 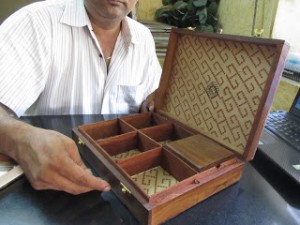 Here is the kit

And so we arrived at another of my ‘tasks’: the Aura herbal wear viral advertising method would be a kit that enables the users to use herbal paints for themselves. So that takes care of the viral object. And it becomes my job to make the cost price of the tie and dye kit as little as possible, as well as to promote it through the little videos I make.

Coming up: A time-based task breakdown of all my tasks for Aura up ahead.

Text: Mili Sethia, our Indian A4 student, who is interning at present.