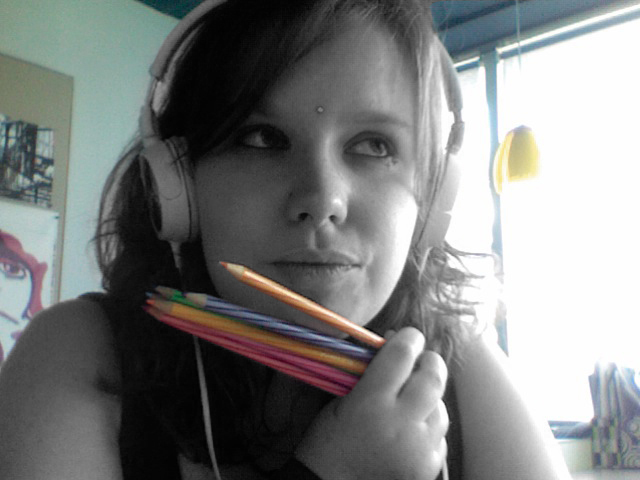 Every morning and evening, I take the bus from Yelahanka NES to Palace Road. One month ago, I began my internship in a graphic agency called Kena Design. You can find it on Palace Road, 4th level of Sycon Polaris, above the shop Croma.

I am not a graphic designer, but I need to improve in this specialty and graphic design is a tool important to communicate all projects.

This agency is typicaly female. All my collegues are women, and are very nice and kind. There is a good ambiance and we talk a lot about the differences between our cultures. Each lunch they help me chose Indian food to discover.

My first project was about the graphics and illustrations for a calendar. They gave me some keywords for inspirations like: India, color, pattern… I began to do research about the colors used in India, patterns, textiles, the indian graphics… I must find a good theme for my calendar. I decided to try with the events in India. Since I arrived in India, each month, there is an event (the Independance Day, or Ganesh and Diwali). So I suggested to my mentor to work on Indan events. I researched what is happening each month in this country.

Sankranti is a event with kites. Mainly in Tamil Nadu, Andhra Pradesh and Karnataka. There are 3 days of very colorful festival is the Feast of the Tamil harvest.

Mainly in the north. Popularly called the festival of colors announcing the start of spring. Lively festival where people throw water and colored powders.

Buddha Purnima is one of the most important Buddhist festivals. It celebrates the birth, enlightenment and attainment of Nirvana Buddha.

Mainly in Orissa. The biggest festival around the temples in honor of the god Jagannath (God of the Universe). Three huge trucks pulled by thousands of pilgrims from the temple of Puri. The same festival in a smaller scale took place at Ramnagar (near Varanasi), Serampore (near Calcutta) and Jagannathpur (near Ranchi).

In northern and western India, ancient tradition which is to attach cords or symbolically ォ RAKHI サ a feeling of brotherhood. This symbolic act is the confirmation of a mutual protection order (between siblings and between friends). These Rakhis Talismen or colored cords that are attached each other around the wrist, the people making these vows of mutual brotherhood.

Harvest festival in Kerala, snake boat race in the lagoons of the coastal state in southern India.

Mainly Pune and Mumbai in Maharashtra but also in Orissa and Madras. Dedicated to the elephant god Ganesh. Giant representation of the deity procession ending with the disposal of it. Festival very colorful, especially the day of immersion Bombay.

National holiday, one of the most popular Indian festival, celebrated in different ways depending on the region. In the north, particularly in Delhi (where the festival is known as Ram Lila) games and songs recall the life of the god Ram. A Kulu it is also very colorful and well-known and also Mysore. In Bengal and eastern regions, it is known as Durga Pudja, south as the Navarat.

National holiday, one of the most lively and colorful Indian festival. In some parts of India this is the beginning of the Hindu calendar. In the eastern states, the goddess Kali is particularly celebrated. In other parts, is the goddess Lakshmi, the goddess of prosperity that is worshiped. Throughout India is a festival of fireworks and firecrackers.

It was very interesting to discover some things about India, the cultutre and these events. I learned a lot about patterns, the importance of the details… And there was Puja Day.

I had difficulty finding the graphism for the project so my mentor advised me choose one event. I chose  to work on the Diwali Festival. I did some drawings, some simple and others detailed. I choose the simple one and I created a card for Diwali. It was a little card for friends, and my collegues said «Oh it’s cute!». During this project, I coded a website, and helped code the flash (Action Script 3) for animations.

Currently, I’m working on Hindi or Kanada typography. I went to the city to photograph each font I saw and I didn’t understand. I classified it and try some iterations. The goal of this project is to create a poster. This Project is always a work in progress.